Hey everyone!  It has been such a long time since I have posted.  We have moved into a new home and I am now a SAHM for our 3 and a half year old firecracker.  She started preschool in September, and I am so thankful that it is going MUCH smoother than we anticipated.  She was having awful separation anxiety this summer after our move and I thought for sure she was going to go bonkers when I tried to leave her at school.  I worked on it for weeks with her: we role played that she was going to school and I was the teacher (pretty easy to play a teacher when you are one ~ LOL) and then she would pretend to be the mommy and I would cry and beg her not to leave and she would reassure me :)  We also read books about school every day and we also "read" a photo book I created of her classroom (thankfully her teacher allowed me to come in ahead of time and take pictures of the classroom).  The first day was tough, but not outrageous ~ just natural.  The second day there were less tears.  The first Monday, she cried again.  Since then she has only cried once!  Thank God!  Prayers and practice both paid off :)

So, one of the many skills they are working on is name recognition.  I have also been working hard with her on recognizing the numerals 1-10.  She recognizes most of them, but not with mastery.  She knows her letters much better than her numerals.  Since I have been practicing numerals with her we have been doing many number order puzzles included in the awesome PreK Packs by the incredible ladies at 2TeachingMommies and TotallyTots as well as a number of other great resources.  The hard part about these puzzles is they don't stay in place.  I did Velcro with one set, but it was a bit bulky and more cumbersome than I wanted.  Since we use magnets for so many of our resources I decided to simply print the puzzles onto magnet paper!  Tonight, I created a Name Puzzle for Isabella with her picture and name. 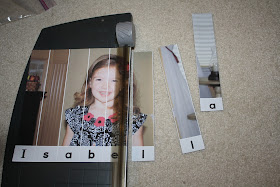 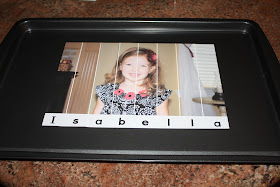 It was really very easy!  First, I opened a new Word doc.  I changed the orientation to landscape and set the margins to minimal.  I inserted a photo of Isabella and centered it and made it as wide as could fit the page.

Next, I created a Text Box using the Draw Your Own Text Box selection and covered the entire picture.  I made sure there was no shading/fill or border color.

Now I was able to add a Table inside the text box.  I made the table with 8 columns and 2 rows.  I adjusted the table so that the bottom boxes were small just for the letters of her name.  Depending on the background colors of your photo, you may or may not want to add shading to the cells.  I made my shading a light gray and used black.  I found a font that didn't have the funny "a" like this one :)

Finally, I printed it onto the magnetic paper, trimmed all the borders, cut the columns and it is now laying on a cookie sheet for her to play with in the morning!  From now on, all of our puzzles will be printed in magnetic paper.